Evolution happens fast in the gun industry. Take for instance the speed of development of the FN 509. In little over three years, the gun has transitioned from its origins in the U.S. Military’s Modular Handgun System (MHS) solicitation, to a market-entry gun in 2017, to the new FN 509 Tactical.

The 509 Tactical’s trigger measured less than 7 pounds. After 1,000 rounds, ours lightened by a half-pound. It’s hinged in the middle and lacks the protruding safety lever in the middle that appears on almost every other striker-fired pistol. The 509 features a clean trigger press with a little bit of takeup that hits a wall. Once fired, there’s little over-travel, and a subsequent shot features a ¼-inch reset with a consistent pull weight.

For me, adding a 3.5 MOA red dot improved G&A’s already impressive accuracy results by an average of 15 percent. This is why I believe red dots are the future, as are suppressed firearms. It’s time to join the movement, and the 509 series is an option I can stand behind.

On opening the soft gun case, besides seeing the flat-dark-earth (FDE) colored pistol, you’re greeted by two 24-­round magazines. Think for a moment, two magazines will hold almost an entire 50-round box of 9mm ammunition — 48 to be exact (plus one in the chamber)! If you think it’s too heavy to carry, you can always fall back on the 17-­round mag. If carried together, that’s 65+1 rounds of 9mm firepower. Wow!

As part of the MHS competition, all contenders were required to use suppressors. The new 509 Tactical meets that requirement with a cold-hammer-forged barrel threaded ½ inch by 28 and with an O-ring to prevent thread cap loosening.

What really makes the 509 Tactical a game-changer is its ability to accommodate more than 10 commercially available mini red dots (MRDs). FN accomplishes this feat through its one-of-a-kind, Low-Profile Optics Mounting System.

The mounting system fits into a cut in the slide that allows mounting an MRD lower than you could on most other pistols. Each gun comes with a bag of adapters and a chart in the owner’s manual describing which MRD plate, insert and screw set to use to attach either the slide cap or red dot sight. The only thing we see they can improve upon is to mark the parts to match what’s in the chart.

G&A tested two FN 509 Tactical samples with three MRD sights — a Burris FastFire 3 ($287), a Leupold DeltaPoint Pro ($520) and a Trijicon RMR ($700) — all performed well. Regardless of the MRD selected, we found the tall Trijicon suppressor-height, three-dot night sights never have to be removed and work well in tandem, co-witnessing with each red dot. 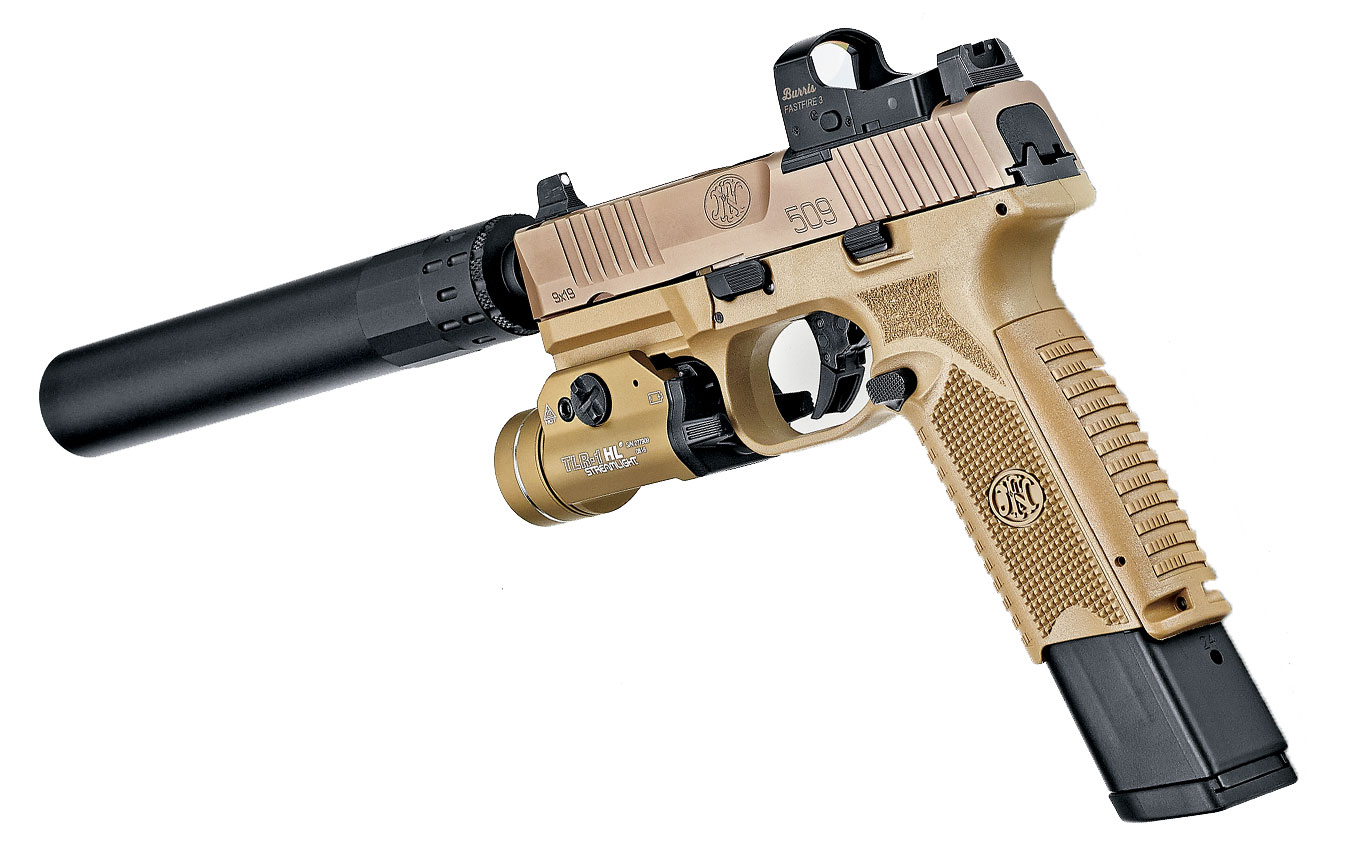 Need to adjust the rear sight? Remove two screws that secure the slide cap with a T-­10 Torx wrench for access. It’s not necessary to have the slide cap attached should you want to shoot and verify your sight adjustment before reinstalling it. Even with the lack of markings, this slide cap design is worthy of praise and easier to access than SIG Sauer’s P320-based M17/M18 and X-series pistols.

The FN 509 Tactical shares the same mechanics and touchpoints as the standard 509. Though the profile of parts such as the slide lock lever, magazine release button, sights, slide serrations and the slide itself mark differences between the models, the internal structure and mechanical design of the 509 series is almost identical to FN’s striker-fired FNS series. The extractor is perhaps the biggest mechanical difference, given that the FNS features a shorter, plunger-type extractor assembly and the 509 uses a spring-­loaded pivoting lever.

Video That May Interest You

The FN 509’s polymer frame features a recessed contour and a shelf for your trigger finger or support hand thumb to sit above the magazine release that provides easier access to the trigger for shooters with smaller hands or shorter fingers. The grip texture isn’t aggressive but provides a confident grasp.

All FN 509s come with two backstrap options, flat and arched. Other companies include three, but this is fine because most people never experiment and those pieces are wasted. It also comes with an ambidextrous magazine release and testing noted that appropriate-length 509 and FNS magazines work interchangeably.

The 509 Tactical’s trigger measured less than 7 pounds. After 1,000 rounds, ours lightened by a half-pound. It’s hinged in the middle and lacks the protruding safety lever in the middle that appears on almost every other striker-fired pistol. The 509 features a clean trigger press with a little bit of takeup that hits a wall. Once fired, there’s little over-travel, and a subsequent shot features a ¼-inch reset with a consistent pull weight.

There are no reviews yet.